Serve Elyria started in the Fall of 2008 when Pastor Jim’s advisory team discussed the need to bring the church together for a unified day of volunteering in the city.  When we realized that the city has a yearly volunteer event called Elyria Pride Day, we decided to hold Serve Elyria on the same day to support the effort and needs of our city.

On May 16th, 2009 over 200 volunteers from the church came out to serve our city.  It was a thrilling day!  We had held a 24-Hour Prayer Vigil to prepare for the day.  Knowing that the weather forecast predicted rain, we prayed fervently for the rain to hold off, siting James 5:17.  The chance of rain was near 100%, so we kept praying.  We knew God had directed us to serve on this day, and we knew He would hold off the rain.  We specifically prayed that God would hold off the rain until we were done, asking Him to water the flowers with rain when we were done.  Sure enough, the ground stayed dry.  We worked and served together with joy.  It was a great day, one to remember.  God got the glory. 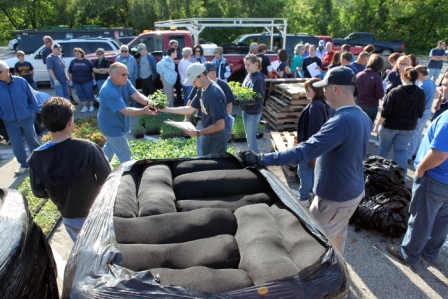 In 2010 and 2011, riding on the huge energy from the previous years,  Serve Elyria had more projects and more volunteers.  During the planning, Gardensoxx (above-ground gardens) were added to the project and were delivered to hundreds of needy families throughout our community. Over 600 volunteers served in 2010 and 800 served the following year.

Then, in 2012 900 volunteers came out to serve our city!  We met in Ely Square, cleaned, served, and painted as other volunteers gave away gardens to needy families.  2012 showed even more growth as we added Serve Avon Lake and called the umbrella event “Serve our City” (Serve Elyria, Serve Avon Lake, etc.).

2013 was amazing as both campuses served across Lorain county. Avon Lake Serve Our City was a huge success with over 120 volunteers! Elyria Serve Our City showed tremendous growth as Open Door partnered with the City of Elyria to landscape Middle Avenue. Last year we added another community with our newest campus, Vermilion. Hundreds of volunteers served three communities and families within the communities!

This year promises to be the best yet! We are hoping to deliver over 250 gardens to area families and help two local schools, three area non-profit organizations, and three cities. Help us reach our goal of 1,000 volunteers!

You can be a part of Serve Our City by signing-up today!